The Georgia top is a scoop neck, sporty style bikini top that can be made reversible. In terms of sewing, it is best for intermediate level swimwear sewers.

In this tutorial, we will be going over 2 methods to sew the Georgia top. Whereas both methods are intermediate level, you may find one easier than the other.

We do our best to make our written directions as easy to understand as possible, but with the nature of the techniques we're using, it can be difficult to understand without a visual aid. Because of this, we highly recommend you watch the video tutorial first in order to get a basic understanding of how this top will be made.

You can find the video tutorial by clicking the link below:

-Overlock machine OR zig-zag stitch on a regular sewing machine

The first few steps are the same for both methods we'll be showing you. Then, we'll branch off to Method 1 and Method 2.

Method 1- No top stitching. This is closest to the method shown in the video, and makes the band easier to attach by treating it like it's a part of the top instead of attaching it last.

Method 2- The band is attached in the final step and top stitched down. This method will allow you to achieve the best fit with the band. 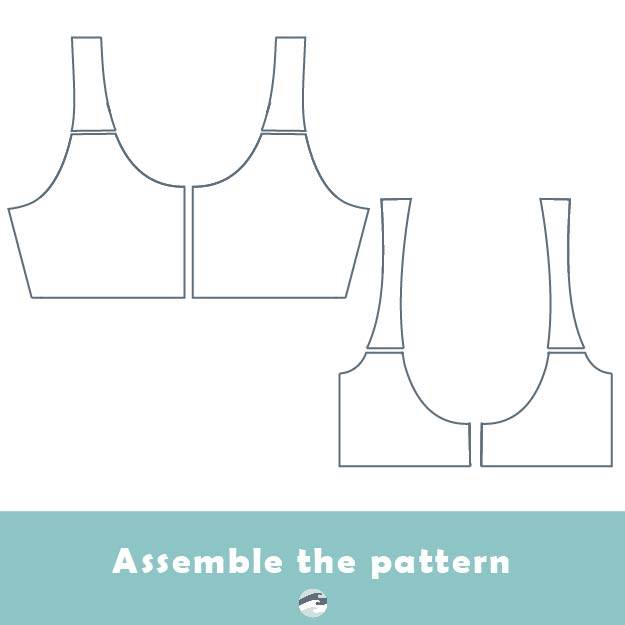 Cut your pieces. If you want to make your top reversible, make sure to have two different fabrics to use. In total you’ll cut 1 of the front and 1 of the back in EACH fabric.

Once you’re done, you should have 4 pieces total- 2 fronts, and 2 backs. 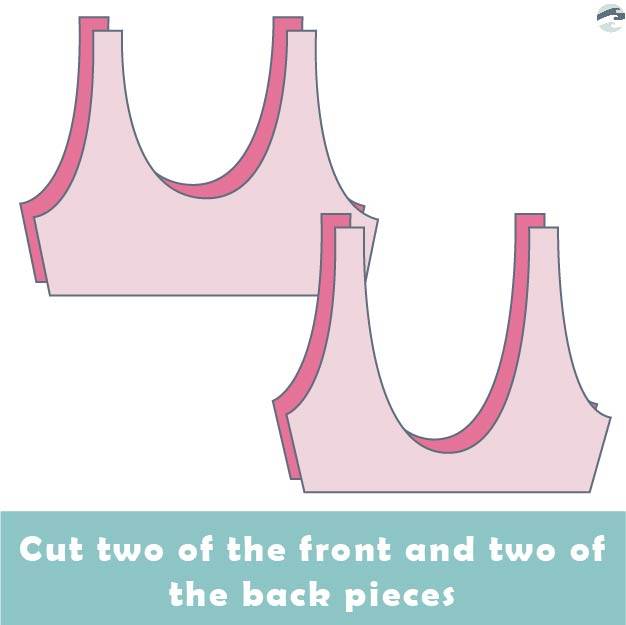 In method 1, instead of top stitching the band we're going to treat it like it's a part of the top. This involves splitting our band piece into 4 sections and attaching each section to each pattern piece. This method is the one closest to the one shown in the video tutorial.

Cut your band according to the measurements provided in the chart inside the pattern. Then, cut the band further into 4 separate pieces.

If you're making your top reversible and you'd like to have two different band colors, cut one band in each fabric at half length, then divide it into two. 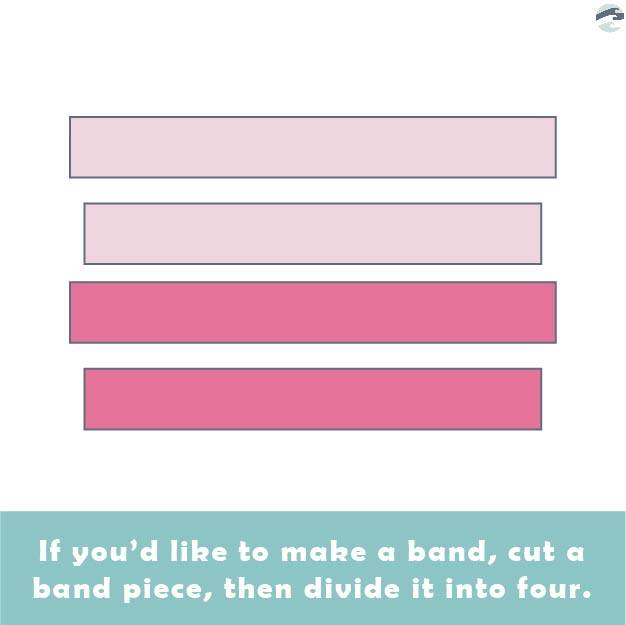 Now lay each band onto each piece, right sides together.

In the image below the bands are purple so you can see easier. However, you'll want to match your band to whichever fabric you'd like to have it be paired with. 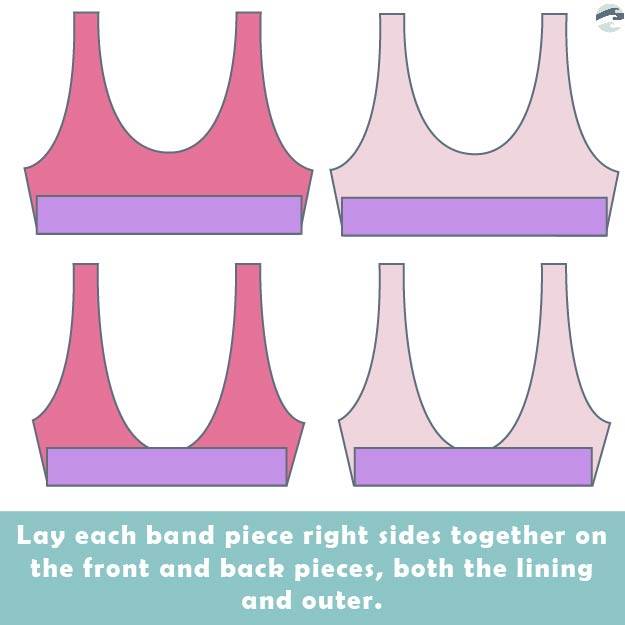 Now sew each band to each piece. 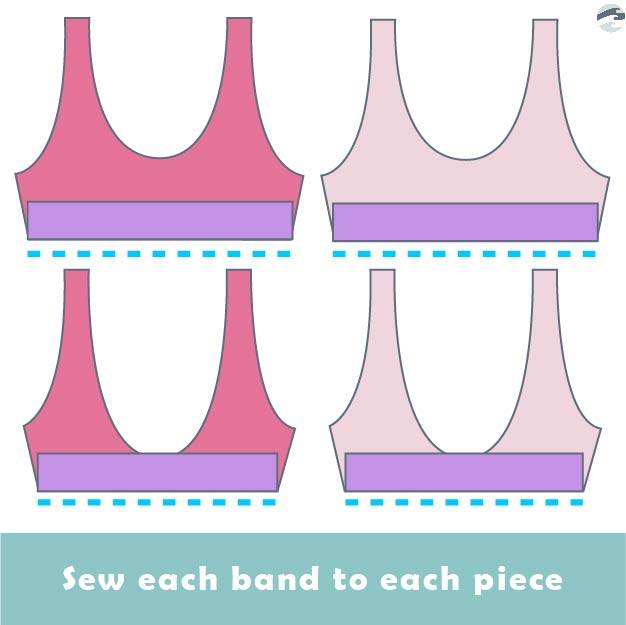 Now for the rest of the tutorial, we just have 4 piece- front lining, front outer, back lining, and back outer. 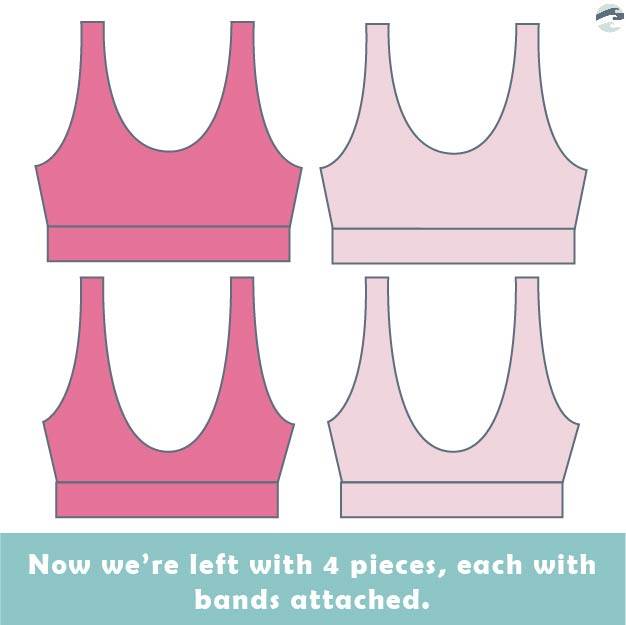 If you'd like to sew 1" elastic into the band, now is a great time to do so while you're sewing the bottom line on the front and back. Simply cut your elastic so it's the same length as your band, and sew it into the seam. 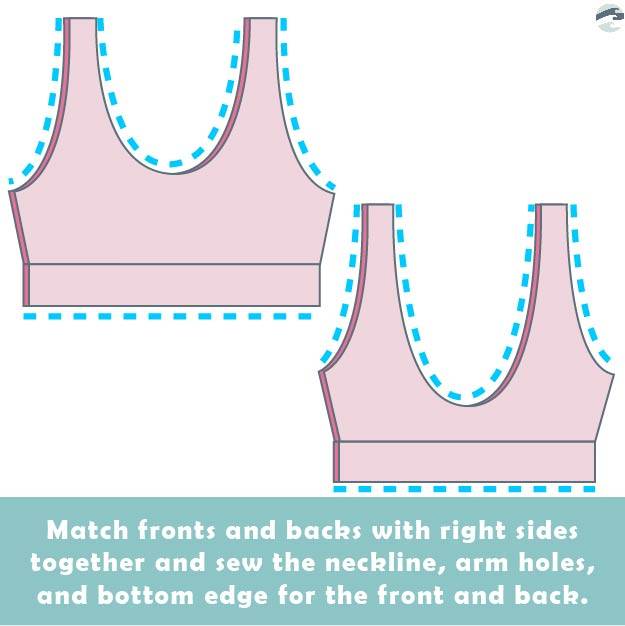 Now take your front piece to the right side. With your back piece STILL INSIDE OUT, insert the front piece inside, making sure right sides are together. 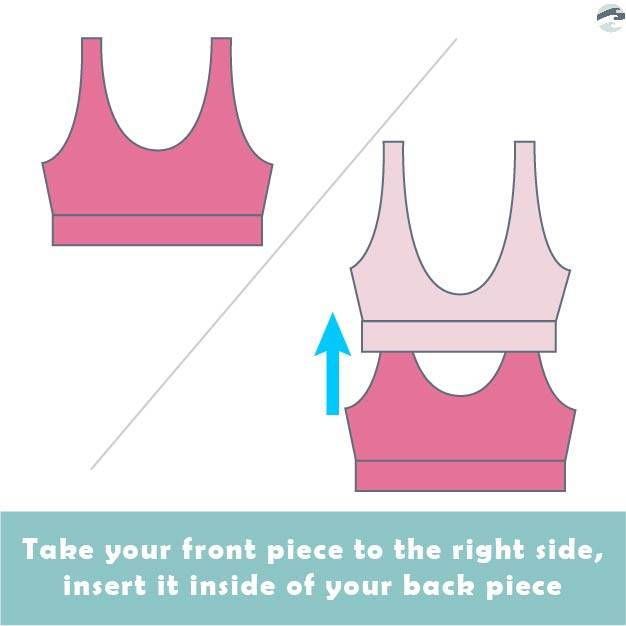 While the front piece is still inside of the back piece, move it so the straps and the sides are lined up with the back piece. Make sure it's not twisted inside, then pin down through 4 layers of each strap and each side. 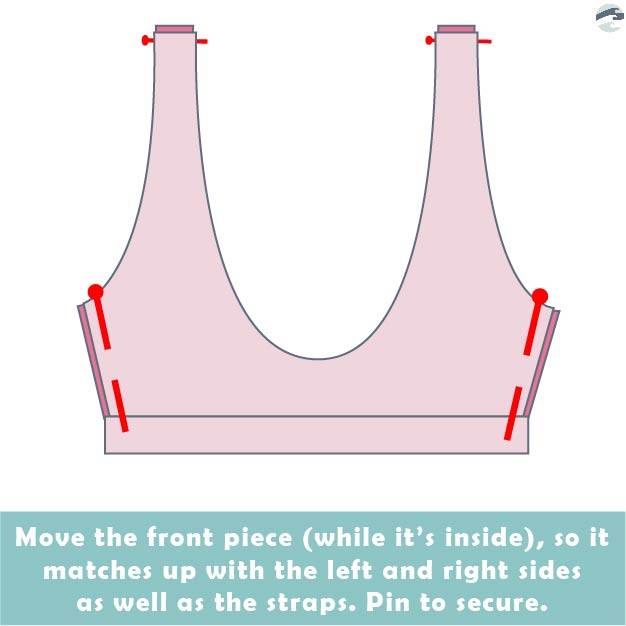 Now sew down each strap and each side. This is going to attach the front piece and back piece together. 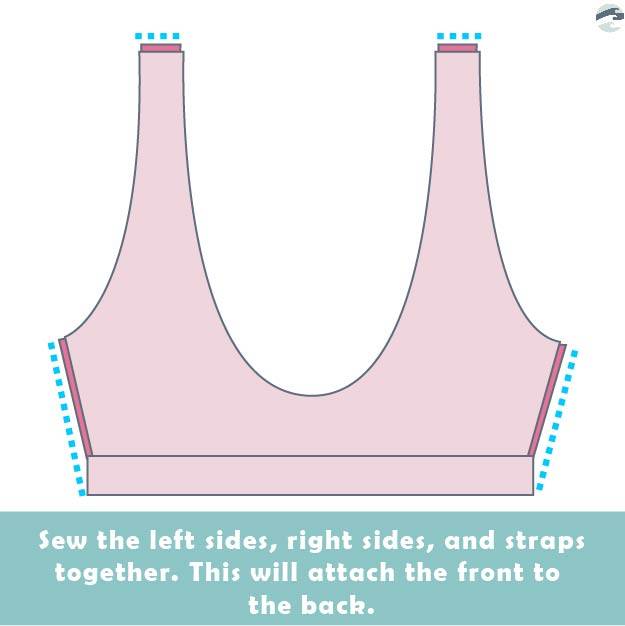 The final steps will allow us to take the top back to the right side and finish it off. Using your seam ripper, seam rip a small 1-2" hole in the back piece. You can put this hole where the tag usually goes, or seam rip anywhere else you feel is best. 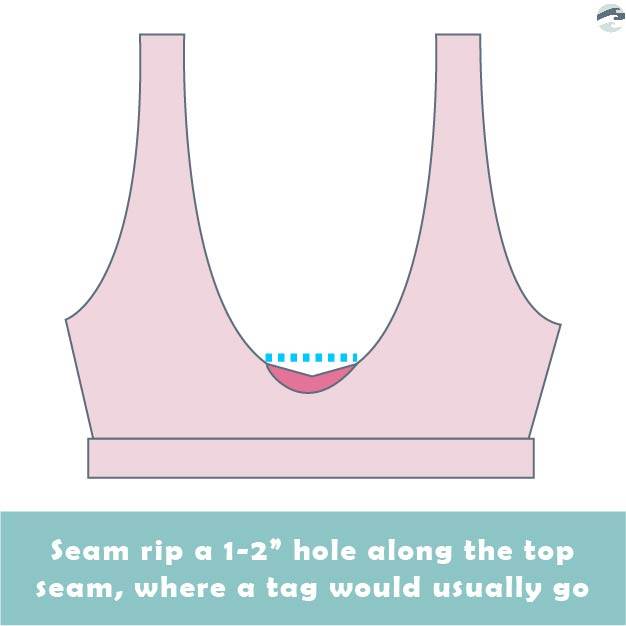 Through this hole, take the entire top back to the right side. 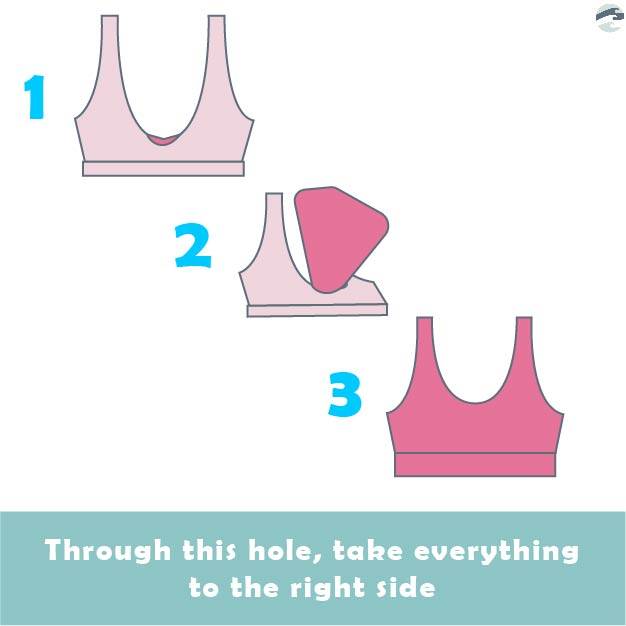 All that's left is finishing off the hole. You may use an invisible stitch or a top stitch to do this. 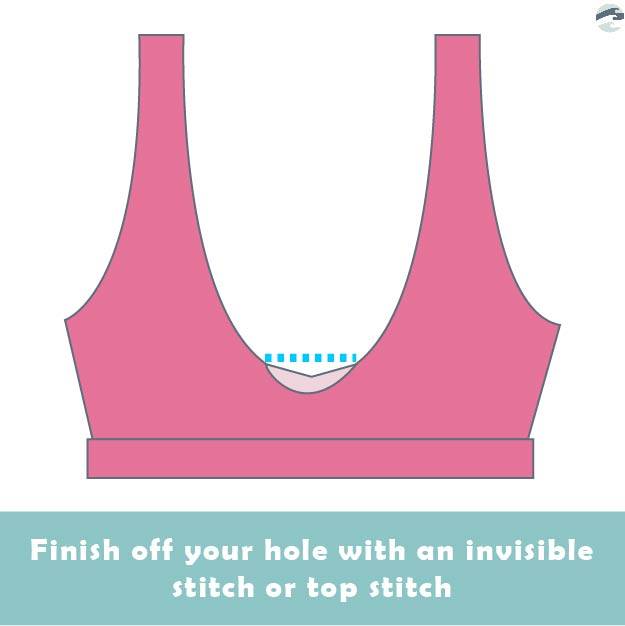 Next we'll go over Method 2. In this method, the band is put on last. This method makes the band more supportive, but beginner sewers might have trouble topstitching.

Cut your band piece according to the measurements provided in the pattern. 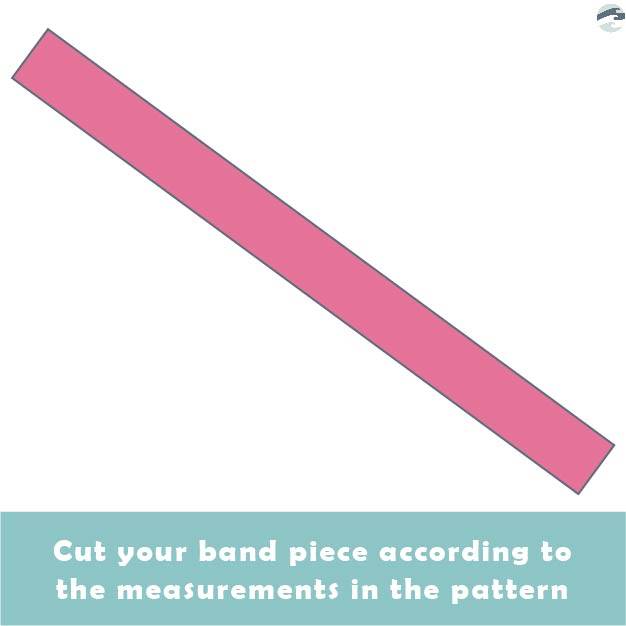 Now match your front pieces and back pieces with right sides together. Sew along the necklines and armholes on both pieces. If you're using 1/4" elastic, sew it into the seam at this step. 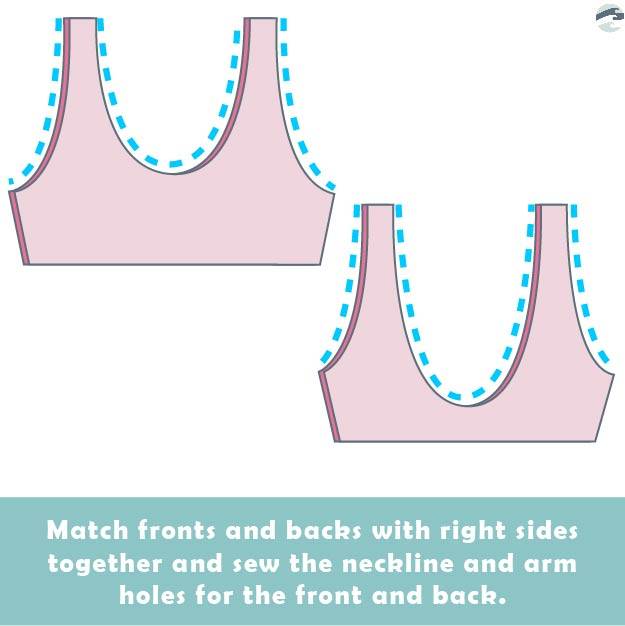 Take your front piece and bring it to the right side. With your back piece still inside out, insert the front piece inside of the back piece. 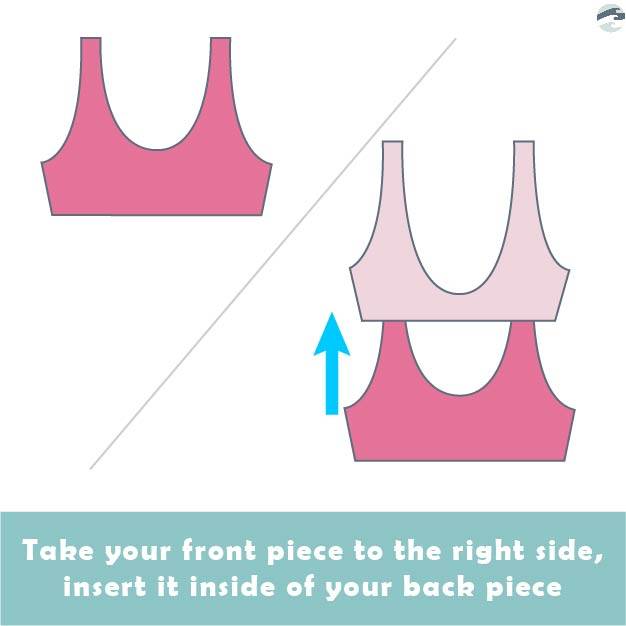 With the front piece still inside of the back piece, line it up so the straps and sides are matched up. Then, pin through all four layers of fabric to secure before sewing. 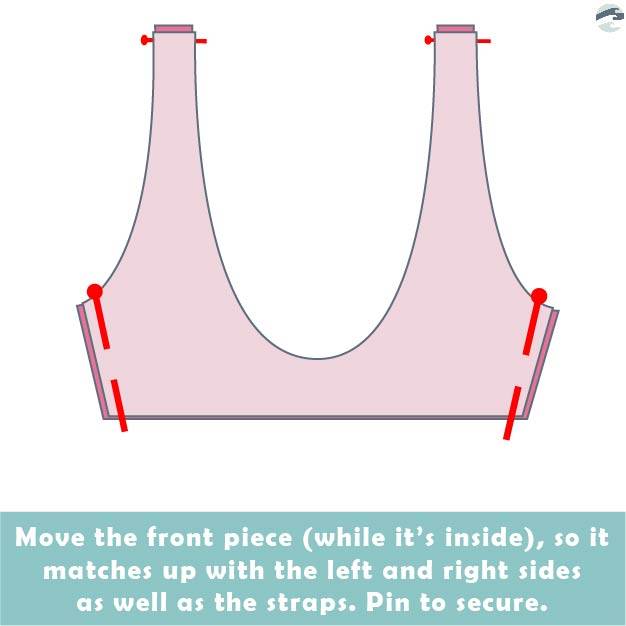 Sew each of the straps and sides down. This will attach the front piece to the back piece. 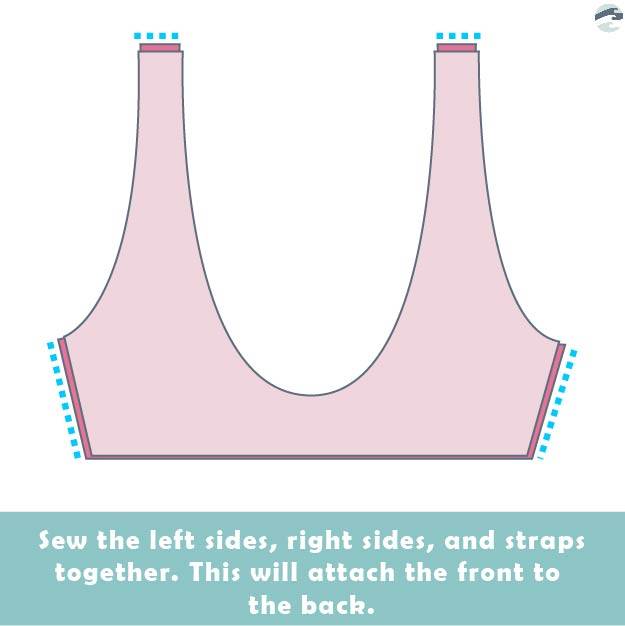 Since the bottom is still unfinished, you can take the top back over to the right side. Now we can stitch the band on. 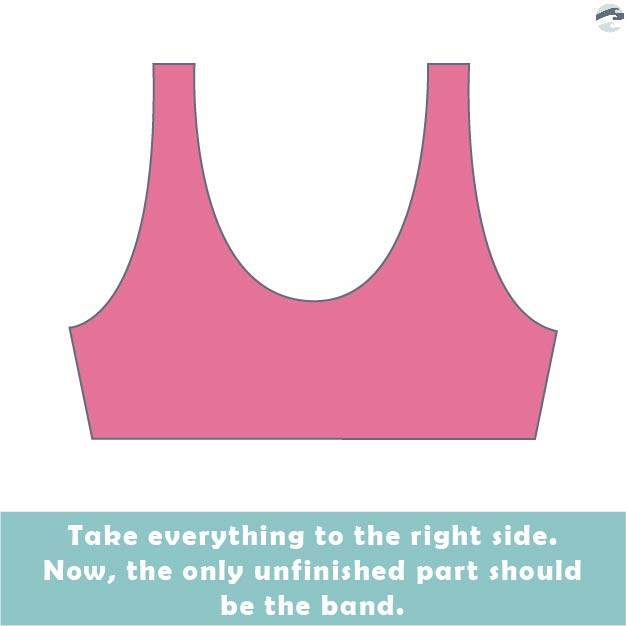 Take your band and match it with right sides together. Sew the open edge so the band is one continuous circle.

If you're using 1" elastic, cut it to be the same length as the band, and do the same thing to make it into a circle. 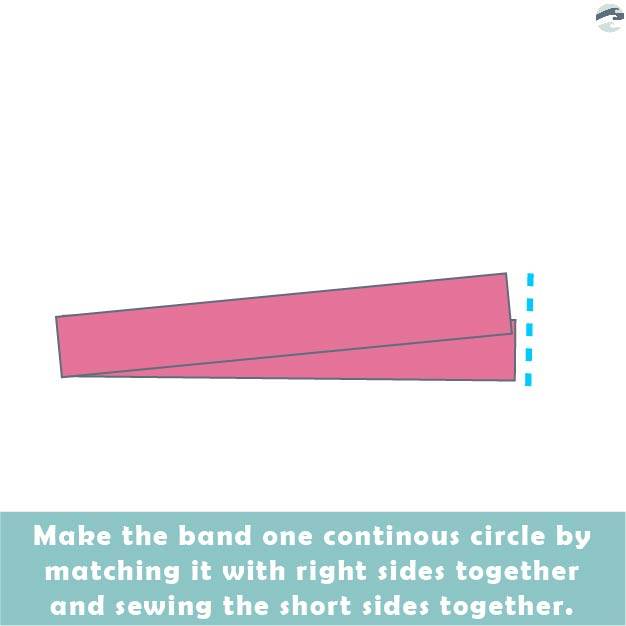 Take your band and match it onto the top with right sides together. you'll pin the band all around the top, pinning through 3 layers of fabric.

Then, sew the band all the way around so it is attached to the top.

After sewing, there should only be one raw edge on the band. 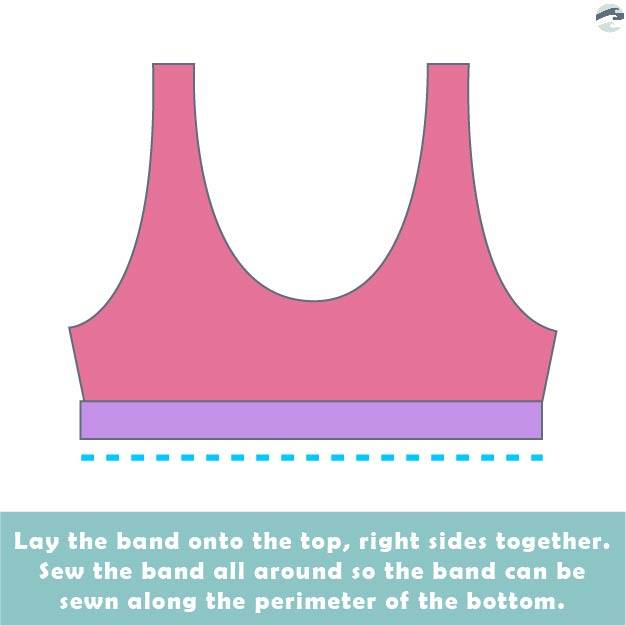 Flip the remaining raw edge onto the inside of the top. If you'd like to use 1" elastic, insert it into the band at this time.

Then and use a zig zag stitch to finish off the band.

You may tuck in the raw edge for a cleaner look, but make sure to add additional seam allowance to the band to account for this. 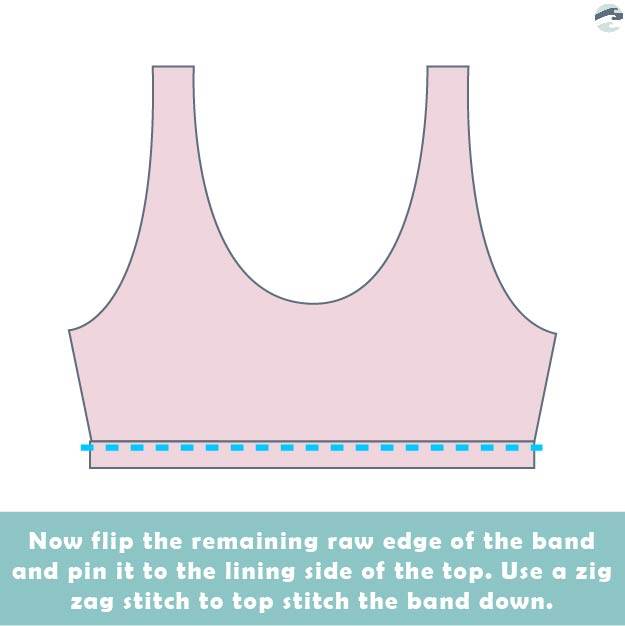 That completes the Georgia top!

If you have additional questions about sewing or construction, our Facebook group is a fantastic resource for new and experienced sewers alike. You can join here: https://facebook.com/groups/edgewaterave 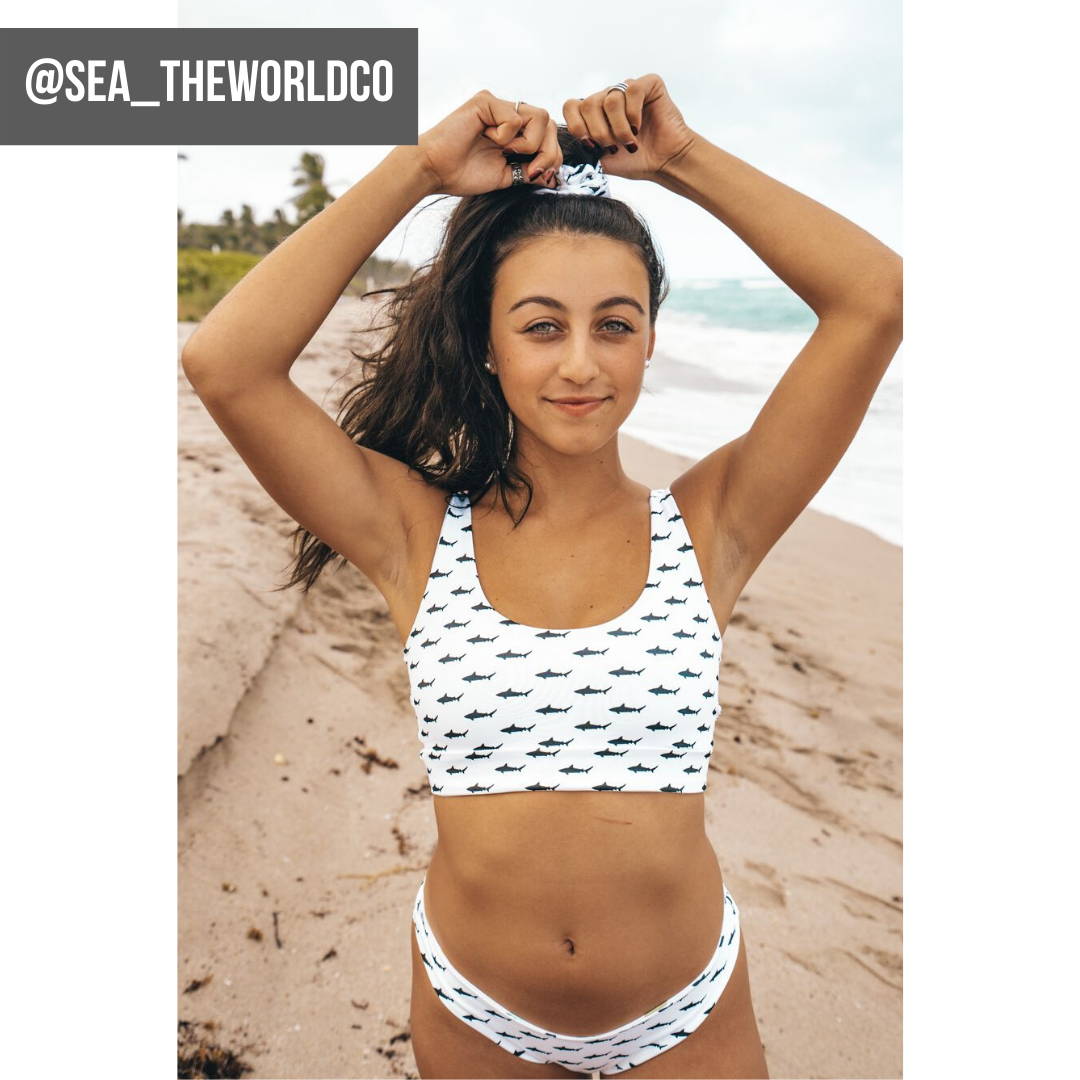 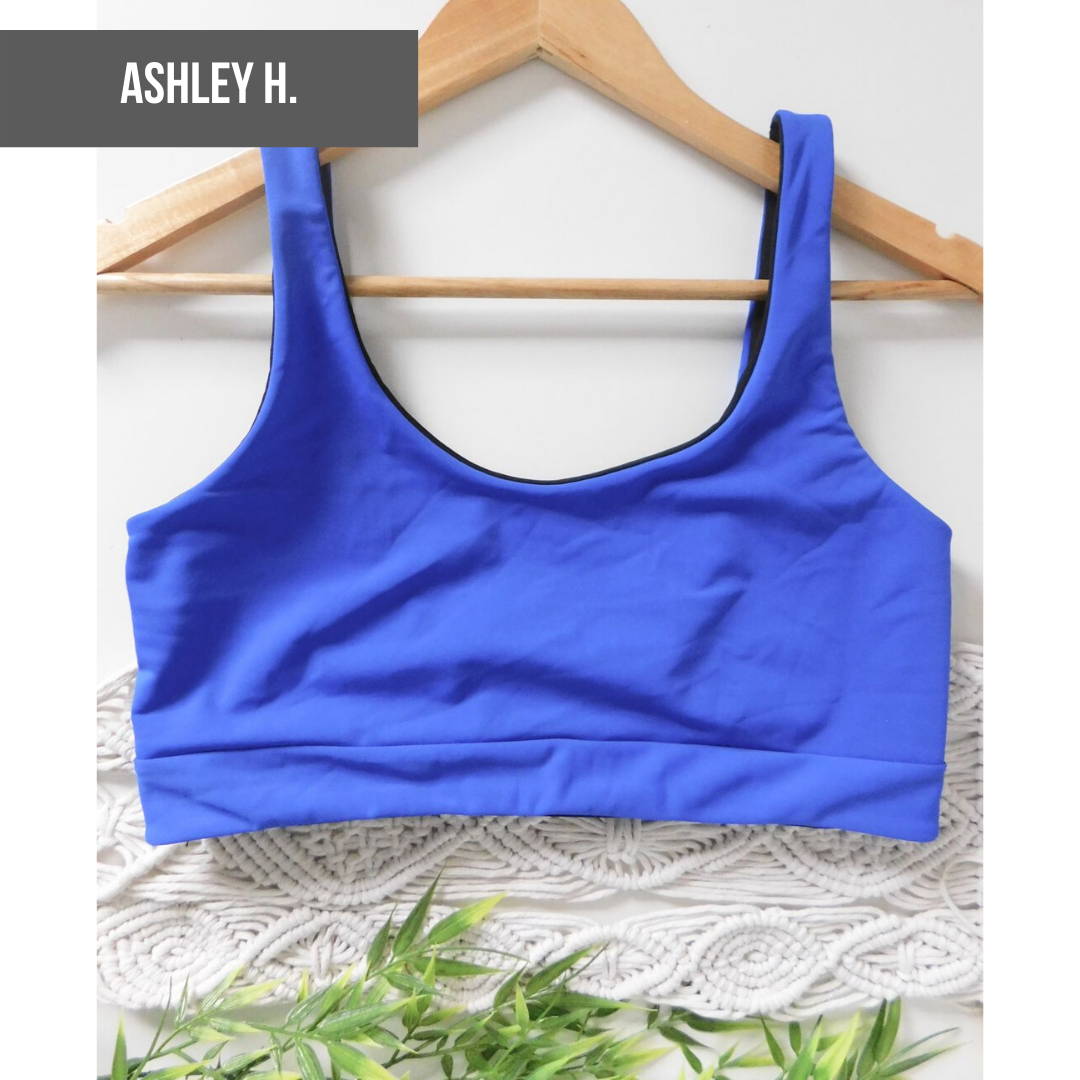